Due to the threat many Christians feel in regard to mainstream science and biological evolution in particular as it challenges biblical teachings, some have resorted to endorsing a pseudoscientific movement referred to as “creation science.”

One such notable Christian is radio talk show host and author Hank Hanegraaff. His para-church ministry is perhaps the most ironic of all as it dons the tagline: “...because life and truth matter.”  In 1998 Hanegraaff decided to publish a book titled: The Face That Demonstrates the Farce of Evolution.

Before displaying those, it is important to note that most of Hanegraaff’s readers, listeners of his radio talk show “The Bible Answer Man” and supporters of his ministry are likely unaware that 98% of scientists believe that humans and other living things have evolved over time. This means that 2% of scientists believe in some form of creationism. And that is just in the United States, which has more creationists than any other industrialized country. In the rest of the world, the number of relevant scientists who accept creationism would logically drop even further. 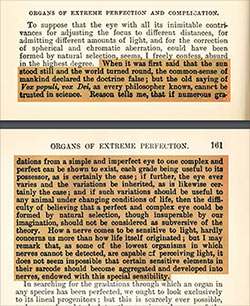 To kickoff this parade of deception, let’s begin in Chapter 4 of his book, titled: Chance
Hanegraaff quotes part of a widely cited passage from Charles Darwin’s “On the Origin of Species” in which Darwin explains that currently (he’s writing in the mid 1800s), common sense about the sophistication of the eye as having formed by way of natural selection may seem absurd, just as the common sense of the day in latter times made the proposal that the Earth traveled around the sun seem absurd. He also makes the point that the intuition or current “voice of the people” should never be blindly trusted in science.

However, Hanegraaff’s reader would never be aware of Darwin’s qualifying sentences since Hanegraaff omits the rest of the quote, where Darwin uses the sun analogy, in the very next sentence!

The scanned image here highlights all the context that Hanegraaff leaves out. Which is the vast majority of Darwin’s quote from that paragraph. This is unfortunately typical of Hanegraaff’s method which uses arguments that sound good if you don’t know what he’s leaving out – whether he’s displaying facts or even quotes, but hiding the important context from his reader.

In Chapter 2 of his book, titled: Fossil Follies, Hanegraaff displays a notorious misquote from a personal letter written in 1979 by Dr. Colin Patterson, senior paleontologist at the prestigious British Museum of Natural History. The quote is in regard to a common creationist cry to the tune of: “ there are never any transitions found in the fossil record.”  This particular out of context quote is often displayed as: “ If I knew of any [evolutionary transitions], fossil or living, I would certainly have included them [in my book ‘ Evolution’ ].”

The first clue that this is a misquote is that anyone even remotely familiar with his famous 1978 text book titled “ Evolution” would know that Dr. Patterson both discusses and gives examples of transitional forms in it! There are actually multiple websites that explain this in minute detail. Talk Origins even has a signed letter from Dr. Patterson from 1997 acknowledging the deception! Furthermore, in the 2nd edition of his book “Evolution” printed in 1999, he even discusses this famous misquote on page 122 and denounces creationism, speaking directly to Hanegraaff’s tactics.

Moving on to chapter 3, titled: Ape-Men Fiction, Fraud and Fantasy
In this chapter, Hanegraaff discusses Peking man, Java Man, and finds ample space to discuss Piltdown man, which has not been used as evidence for human evolution for decades, as well as Nebraska man, which was shown not to be a hominid five years after its discovery and was never used as evidence for human evolution. However, he finds no space to discuss a single African fossil or australopithecines like Lucy, Habilenes, or Turkana boy? Hanegraaff seems too busy with 100-year-old confusions about pig teeth to worry about more relevant fossil finds in the last 50 years.

In specific deception, Hanegraaff states that Java Man was really a modern human and that the 1911 Selenka expedition report proves this. Evolutionist Sir Arthur Keith (whom Hanegraaff quotes as a source) states in a 1911 article that the report’s conclusion that Java Man was not a human ancestor was based on “slender evidence.”

However, in Sir Arthur Keith’s later book “ The Antiquity of Man” published in 1915 on page 270 makes it clear that he accepted Java Man as a human ancestor: “an early stage in the true and direct line of human evolution...”  So it is obviously and tremendously dishonest to take an earlier 1911 report as the final word on this subject when it’s widely known that a specific and more up-to-date study exists.

It’s also quite curious that Hanegraaff fails to mention all the subsequent independent investigations by other scientists such as physical anthropologist Davidson Black in 1932, biologist Ernst Mayr in 1944 and German physical anthropologist Franz Weidenreich in 1946 which further confirmed Java Man as a human ancestor and classified it specifically as a member of Homo erectus. 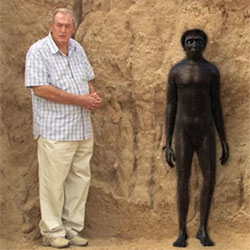 As mentioned above, long before Hanegraaff’s book was published, numerous other discoveries including Turkana Boy (aka Nariokotome Boy), which is the almost complete skeleton of a nearly full-grown Homo erectus was unearthed. His total disregard of these finds shows full well his dishonesty in his examination of the fossil record.

But here is where the real dishonesty comes in. This is what Hanegraaff said about Dubois’ find:

“Most unsettling of all is that for almost thirty years, Dubois downplayed his discovery of two human skulls (the Wadjak skulls), which he found in close proximity to his original “ finds.” This alone should have been sufficient to disqualify Java Man as humankind’s ancestor.”

Really? Wadjak is over 60 miles away from Trinil, which is where the Java Man find was made. And the Wadjak skulls were also found in a different geological strata. Hanegraaff seems to have very strange idea of what the words “close proximity” mean. He, of course, was trying to give his readers the (false) impression that Java Man and the Wadjak skulls were from essentially the same location and therefore that (supposed) proximity shows that Java Man could not be ancestral to humankind.

The reason that Dubois did not place much emphasis on the Wadjak skulls is that they were of modern-type humans and not particularly remarkable, and that they were overshadowed by the importance of subsequent finding of the Java Man material, not because he was committing fraud, as Hanegraaff reprehensibly proposed.

But the point is that Hanegraaff was, in effect, lying about the relationship of the two finds.