It is difficult to believe that a person who claims to have three doctorate degrees and to be so well read would need to resort to exaggeration or false statements. But again, when one has so many years invested in publicly debating the existence of god and who lectures on how science supposedly backs up that notion, such deception becomes more and more understandable. 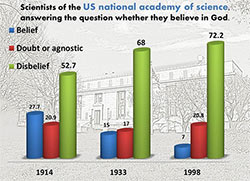 During a live debate in early 2019, to add much needed weight to his position, Lennox stated that about eighty or ninety years ago “forty percent of working scientists believed in god and that has shifted by only two percent in seventy or eighty years.”  However, if one does even a little bit of research, it becomes evident that he is speaking of only American scientists and even with that, there has been a distinct decline in even less than the time span that Lennox proposes. In a matter of just thirteen years (1996-2009), the percentage of American scientists who believe in a god has dropped from forty percent to thirty three percent. Furthermore, among leading scientists, the decline has been even more significant, dropping from nearly twenty eight percent in 1914 to a mere seven percent in 1998.

Unfortunately, the above is not an isolated incident. This has become one of John’s subtle tactics. In March of 2013 he gave the Vice Chancellor’s Open Lecture at the University of Cape Town on the topic of “A Matter of Gravity: God, the Universe and Stephen Hawking”. During the lecture, Lennox can be heard stating that “There are scientists on each side of it.” while speaking of the conflict between theism and atheism. As to give equal weight to each side. This is an often subtle yet common tactic that many christian apologists and/or creationists employ to create a picture in the unread person’s mind of a balanced scale, with a virtually equal amount of scientist and evidence on both sides.

Leaving Out the Conclusion 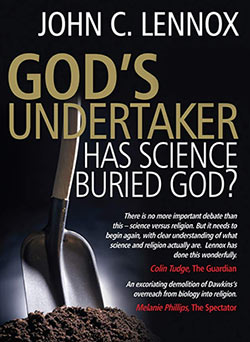 If one reads through Mr. Lennox’s printed work, the deception continues. In his book “God's Undertaker: Has Science Buried God?” he mines the same old snippets from paleontologists like Stephen Jay Gould (who unequivocally expressed his disdain for this practice by creationists like Lennox in his essay titled: Evolution as Fact and Theory).

Lennox also attempts to recycle long refuted “irreducible complexity” arguments for the eye and bacterial flagella. Completely ignoring work and demonstrations by scientists like Richard Dawkins from decades ago demonstrating how the eye evolved. This despite being extremely familiar with Dawkins’ work and having formally debated him in 2007 and again in 2008.

In addition to these classic quote mining methods which can be seen with other christian apologists on this site, Lennox actually cites Darwin’s close friend Joseph Hooker’s initial problems with Darwin’s manuscript for On the Origin of Species as evidence against the theory (pages 106-108). All the while not telling the reader that Hooker later wholeheartedly endorsed the text and the mechanisms Darwin described! 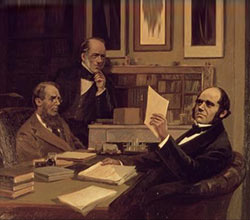 For those not familiar, Joseph Hooker first learned that Charles Darwin believed in the transmutation of species in 1844. For the next 14 years, Hooker remained a “non-consenter” to Darwin’s views, resolving to keep the question of species origin “subservient to Botany instead of Botany to it” Hooker placed particular emphasis on the need for any theory of species origin to support the broad taxonomic delimitation of species. His provisional support for special creation waned during the 1850s as he lost faith in its expediency for coordinating the study of plant geography, systematics and physiology. In 1858, Hooker embraced Darwin's “considerable revolution in natural history,” after Darwin had carefully molded his transmutationism to meet Hooker’s specifications. (Journal of the History of Biology, Volume 39, Issue 1, Spring 2006)

Joseph Hooker embraced it so much that at the historic debate on evolution held at the Oxford University Museum in June of 1860 involving Bishop Samuel Wilberforce, Joseph Hooker delivered the most effective reply to Wilberforce’s arguments by his own account.