As we continue to discover, many christian apologists and “scientists” have zero academic credentials at worst, or sketchy credentials at best. Eric Hovind is the son of the infamous Kent Hovind who served a ten-year prison sentence in January 2007 for federal court convictions for failing to pay taxes, obstructing federal agents, and structuring cash transactions. Kent continues to be a controversial figure in the Young Earth Creationist movement and his ministry focuses on attempting to convince listeners to deny scientific theories in fields including biology, geophysics, and cosmology, in favor of a literalist interpretation of the Book of Genesis creation narrative found in the Old Testament.

His son Eric decided to follow in his dad’s footsteps, in more ways that one. Eric’s biography currently states that he is a 1999 college graduate. But as of 2013 it no longer mentions what college. As it turns out, this is for good reason. Eric’s one attempt at completing a credential in higher education used to be referenced on his biography prior to 2013 as Jackson Hole Bible College in 1999, which is not a real college. Jackson Hole is an unaccredited, one year Christian “school” at a campsite that offers a “Diploma in Biblical Foundations” (not to be confused with real credentials such as degrees that take years of study complete). Unlike real college classes that are taught by people with PhDs for several weeks, Jackson’s classes last only a week, such as its backpacking class. At the time of this posting, it’s website jhbc.edu has been taken down. 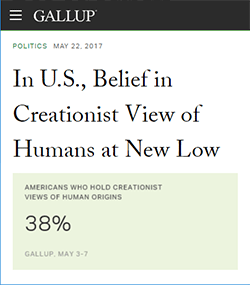 In his 2010 blog post titled “Creationism Dishonesty?” Eric Hovind states that “If we want to be honest and go with statistics, then let’s point out that the majority of people in America believe that God created the world within the last 10,000 years.” However, the 2010 Gallup Poll that Eric refers to, clearly states and shows this statistic at 40%. Even when this statistic peaked in the 1990s, it was still less than 50%. It is also worth noting that at the time of this post, it continues to decline and is currently at an all time low of 38%.

Eric has also produced a video series titled: Beginnings
In Session 2 of this series he speaks specifically about the age of the universe and how planets like Jupiter and moons like Ganymede simply “couldn’t” be billions of years old as mainstream science has led us to believe. His single proof is that they are still hot. He then displays a quote from a 1996 Denver Post article (that featured a LA Times article) written by professor and science writer K.C. Cole, with the quote: “Yet Ganymede should have cooled solid billions of years ago.”

However, what is left out of Eric’s lesson and quote displayed, is the qualifying part of K.C. Coles’ article. She goes on to quote UCLA geophysicist Gerald Schubert who states that, “Ganymede somehow got reheated recently – about half a billion years ago - presumably by getting pulled and flexed by Jupiter’s enormous gravity.” Schubert then he goes on to speculate that this would also indicate that Ganymede was once in a closer orbit with Jupiter.

Those who are fans of astronomy would quickly understand this, as that is precisely how most moons are formed – via a collision with a larger body and they then begin to orbit that larger body closely and gradually move away. Earth’s moon for instance, has been calculated to have been about 15 times closer to the Earth when it was formed and is continually moving away from us.

As for Jupiter losing heat yet remaining hot, some quick research would inform anyone that what is going on is what scientists have learned and call the Kelvin–Helmholtz mechanism via contraction. As a result, Jupiter shrinks by about 2 cm each year from losing heat. When it was first formed, Jupiter was much hotter and was about twice its current diameter. As it cools, it also outputs less and less radiation. Eventually, it will reach its "equilibrium temperature" – the point at which the amount of infrared radiation emitted is equal to the amount of sunshine absorbed. At that point, its temperature is steady, and it will stop shrinking. So Jupiter will never cool down and become frozen solid as Eric Hovind teaches.

So when Eric teaches his listeners (many who are impressionable children), “How could it [Jupiter] be losing heat for billions of years and still be hot? It couldn’t!” he is pretending to know something that he simply doesn’t. Also known as dishonesty.