In perhaps one of the most notorious Christian deceptions of the 20th century, Peter Popoff’s televangelist ministry was exposed in 1986 by skeptic James Randi for using an earpiece to receive radio messages from his wife who was giving him the home addresses and ailments of audience members which he purported that he was receiving from God during his faith healing rallies.

Despite going bankrupt the very next year in 1987 as a result, Popoff has made more than a recovery. In 2005, he received more than $23 million dollars in “ministry” donations. Currently he is using a portion of those donations to purchase TV time to promote "Miracle Spring Water" on late-night infomercials and via postal letters. However, it turns out that this miracle spring water that he stated was from Southern Russia is actually being purchased at Costco, the supermarket megastore. And of course, these days, Popoff once again refers to himself as a prophet. 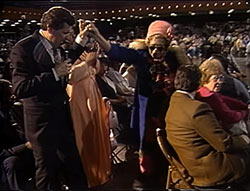 In the early 1980s, Popoff’s miraculous “curing” of chronic and incurable medical conditions became a central attraction of his faith healing rallies. Popoff would also “command” seemingly wheelchair-bound supplicants to “rise and break free in the name of Jesus.”  Obediently, the supplicant would then stand and walk without assistance, much to the joyous cheers and astonishment of the crowd. Critics and investigators later discovered that the recipients of these dramatic "cures" were fully ambulatory people who had been strategically seated, many in wheelchairs by Popoff’s assistants prior to the broadcasts and events. It was later discovered that the wheelchairs were specifically rented by Popoff’s ministry for that intended guise. A recording captured by a team of investigators led by the mentalist Banachek disclosed Popoff’s wife Elizabeth specifically and audibly referring to one of the chairs as a rental, verbatim.

In yet another scam in 1985, Popoff began soliciting donations for a program to provide bibles to citizens of the Soviet Union by attaching them to helium-filled balloons and floating them into the country. When skeptics asked him to prove that the money he had collected had in fact been spent on bibles and balloons, Popoff staged a burglary at his own headquarters. On subsequent broadcasts he tearfully begged for additional donations to help repair the damage.

In yet another act of deception, in 2006 Popoff’s ministry merged with a small church in Farmers Branch, Texas, titled “Word for the World” which operated out of a storefront. By being classified as a church, the Popoff’s operation no longer had to report annual income or salary to the IRS. When a reporter from GQ attempted to visit this church on a Sunday morning in late 2016, he found a deserted parking lot in an industrial park with no church sign visible on the outside. Later, Popoff's people would tell the GQ reporter that the church had recently moved and was going by a new name.