Not a christian per se, but a Jewish writer, actor and lawyer, Mr. Stein is also a filmmaker. He co-wrote and starred in a 2008 “documentary” titled Expelled, which portrays “intelligent design” (Creationism under a different name) as a scientifically valid alternative to the evidence based theory of evolution. The documentary also alleges a scientific conspiracy against those promoting “intelligent design” in laboratories and classrooms. Stein has stated that his aim was to expose "people out there who want to keep science in a little box where it can’t possibly touch God.”

Soon after the release of the film, notable organizations such as USA Today, The Chicago Tribune and Scientific American quickly exposed it’s blatant deception. The New York Times described it as "a conspiracy-theory rant masquerading as investigative inquiry" and "an unprincipled propaganda piece that insults believers and nonbelievers alike."

Of course, one of the very rare positive reviews of the film came from Christianity Today which gave the film a rating of 3 out of 4 stars. While the American Association for the Advancement of Science (AAAS) described the film as dishonest and divisive propaganda.

Although, the film has seemingly endless dishonest aspects to it, we will show it’s top 3 egregious deceptions.

Notable scientists Dr. PZ Myers, Dr. Richard Dawkins, Dr. Michael Shermer and Dr. Eugenie Scott who are all open critics of “intelligent design” were asked, and agreed to be interviewed for the film. They all quickly responded after viewing the film for the first time. Each stated that they were completely misled into participating in the movie after being asked to be interviewed for a film by a completely different name titled: “Crossroads: The Intersection of Science and Religion” and were directed to a blurb implying an approach to the documentary crediting Darwin with “the answer” to how humanity developed. 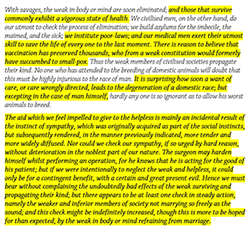 Expelled pieces together quotes from Charles Darwin selectively to connect his ideas to eugenics and the Holocaust. When the film is building its case that Darwin and the theory of evolution bear responsibility for the Holocaust, Ben Stein’s narration quotes from Darwin’s The Descent of Man. The graphic to the left highlights in yellow what was omitted as the narration is read aloud.

Worse yet, Stein and the producers of the film did not mention the very next sentences in the book (also in yellow) where Darwin explicitly rejects the idea of eliminating the “weak” as dehumanizing and evil. And that man’s care for the weak is “the noblest part of our nature.” Those words falsify Expelled’s argument. The filmmakers obviously had to be aware of the full Darwin passage, but they chose to quote only the sentences that suited their purposes.

Mr. Stein was actually put on the spot and asked by John Moore during an interview on his National Post radio show about these quote omissions, Stein dismissed the deception by stating, “If any Darwin fans are listening and we have misquoted him, we are sorry; we don’t mean to diss Darwin.”

Lastly, the film paints the picture of an ID-sympathetic researcher named Richard Sternberg who lost his job at the Smithsonian Institution. However, the truth is, he was never an employee there. The position of editor was unpaid and voluntary, and Sternberg had put in his resignation from it six months earlier!

One section of Expelled relates the case of Richard Sternberg, who was a researcher at the Smithsonian Institution’s National Museum of Natural History and editor of the journal Proceedings of the Biological Society of Washington. According to the film, after Sternberg approved the publication of a pro-ID paper by Stephen C. Meyer of the Discovery Institute, he lost his editorship, was demoted at the Smithsonian, was moved to a more remote office, and suffered other professional setbacks.

The film mentions a 2006 House Committee on Oversight and Government Reform report prepared for Rep. Mark Souder (R–Ind.), “Intolerance and the Politicization of Science at the Smithsonian,” that denounced Sternberg’s mistreatment.

The actual truth is that Sternberg was never an employee of the Smithsonian. His term as a research associate always had a limited duration, and when it ended he was offered a new position as a research collaborator. As editor, Sternberg’s decision to “peer-review” and approve Stephen Meyer’s paper by himself was highly questionable on several grounds, which was why the scientific society that published the journal later repudiated it. Sternberg had always been planning to step down as the journal’s editor. The issue in which he published the paper was already scheduled to be his last.

The report prepared by Rep. Souder, who had previously expressed pro-ID views, was never officially accepted into the Congressional Record. Notwithstanding the report’s conclusions, its appendix contains copies of emails and other documents in which Sternberg’s superiors and others specifically argued against penalizing him for his ID views. More detailed descriptions of the Sternberg are documented on Wikipedia.