Ravi Zacharias was an internationally renowned Christian evangelist. He was also a fascinating example of how someone can deceive millions of people even when the truth is right under their noses. As a master of stagecraft, he has convinced most of the world that he holds three doctorates, is a former visiting scholar at Cambridge University, as well as a professor at Oxford University.

All three claims are completely false.
Let’s tackle them one by one. 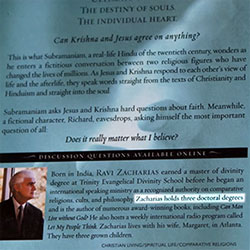 The actual truth is, Ravi Zacharias has absolutely no graduate degrees. Yet he routinely refers to himself as “Dr.” Zacharias and speaks in venues where the title is understood to mean that the bearer has completed a course of doctoral studies.

The multiple doctorates claim has spread widely and can be seen in the author bio’s of publishers like Penguin Books and Random House with no mention of these degrees being merely honorary. While ethical protocols and plain old honesty require that honorary doctorates be clearly marked as such.

Curiously, after being called out by RaviWatch.com, Mr. Zacharias responded with a peculiar act. He added the word “honorary” to two of his websites in Europe, but as for the main website and Canadian website (RZIM.org) he left that word out but reduced the number of references to himself as Dr. Zacharias from seven instances to three.

Mr. Zacharias states in his autobiography titled “God in the shadows” on page 205 that in 1990 he spent some time at Cambridge University were he had been invited to be a visiting scholar. This is “the” crown jewel in his extremely sparse academic resume. And he has broadcast it widely. However, the claim is completely false.

So Mr. Zacharias most cherished academic claim is completely false. In the summer of 2015, when RaviWatch.com contacted Zacharias to inform him that they were going to make this information public, he removed the prestigious Cambridge University from his bio and replaced it with the more humble but accurate Ridley Hall, Cambridge. 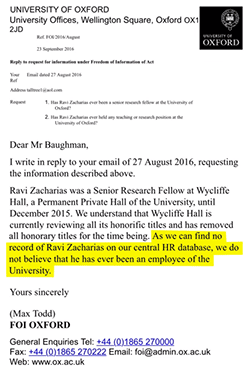 Ravi can been seen and heard publicly claiming that he travels “three times a year to lecture at” and “lectures regularly” at Oxford University and is a Senior Research Fellow there. He has even gone so far as to state that he is an actual professor at Oxford University! While this impressive claim has spread widely, as you probably can guess.. It is simply false.

Once again, RaviWatch.com contacted Oxford University only to learn that Zacharias has NEVER been an employee of Oxford. And his senior research fellow position had actually been at a place called Wycliffe Hall, another religious training institute whose stated goal is to train evangelists and help people find “a new love for Jesus...”

The Oxford University Student Handbook makes it abundantly clear that Wycliffe Hall is not one of Oxford’s colleges that comprise Oxford University. And to make matters worse, upon further investigation, Wycliffe Hall has stated that not only has Mr. Zacharias never held a formal teaching position, but that his research fellow position was merely honorary. A fact that Mr. Zacharias did not disclose on his public website bio until after RaviWatch.com informed him that they were investigating the validity of his credentials.