Can God answer prayer and even heal?

Allegedly, some 2,000 years ago “God” was performing miracles left and right. That is if you take the words of the Old and New Testament at face value. But curiously, as humans developed scientific investigation and video recording, reports of “miracles” have been on a steady decline.

The reason the amputee argument is a great test for any type of supernatural reality or claim of divine healing is that it cannot be mistaken for any naturally occurring phenomena in humans. For instance, when someone is diagnosed with cancer, and then later tested again only to find no sign of cancer, there are a few natural possibilities. The most common possibility is what is called a “false positive.” False positives can unfortunately happen when it comes to disease and medical diagnoses. A false positive test result refers to a test that suggests the presence of disease, but is ultimately proven to be in error (usually by additional, more precise testing). There is also something called a misdiagnosis. Misdiagnosed patients do not have the condition at all, or have a totally different condition, but are treated in error for the condition that was misdiagnosed.

Another possibility is a natural phenomenon that can occur, and has a occurred in all different types of mammals including humans. It is what is known as “spontaneous remission.” Spontaneous remission, also known as spontaneous regression, is an unexpected improvement or cure from a type of disease that normally progresses significantly. These terms are commonly used for unexpected transient or final improvements in cancer. Spontaneous remission can happen in most primates and occur in religious people as well as atheists, without any pattern, rhyme or reason. Conservative statistics estimate fewer than 25 Americans have true spontaneous cancer remissions each year. This is a rare occurrence, considering that nearly 1.5 million Americans are diagnosed with cancer annually. However, it continually happens.

The fact of the matter is that our bodies are constantly fighting off and attacking disease. It should come as no surprise that in some cases, our bodies even prevail over cancer. 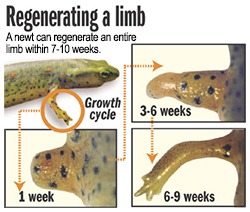 What is even more curious is that we do find natural limb regeneration in other species. For instance, salamanders can regrow entire limbs and regenerate parts of major organs, an ability that relies on their immune system. Starfish and certain lizards can do this as well. As a matter of fact, scientists are currently working on reverse engineering the process (via immune system cells) used by salamanders and attempting to incorporate that into human therapies. If humans are able to regenerate limbs one day, it will be through science and not an invisible deity.

Unfortunately, these aforementioned occurrences do not apply to human amputees. There is no such thing as an amputation false positive, misdiagnosis or spontaneous remission. This serves as quite the test for claims of divine healing being a reality or possibility. Anyone who has spent time looking into healing “miracles” would note that they always seem to pertain to maladies such as cancer, stroke or Parkinson’s Disease, which do occasionally remit, even in the absence of appeals for divine intervention.

But haven’t there been reports of regenerated limbs? 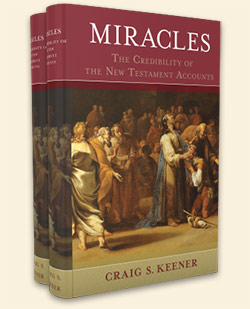 Yes, there have been. Emphasis on the word “reports.” Such reports seem to always contain two, three and sometimes four degrees of separation from the person reporting and the event itself. We also never seem to be able to access the person alleged to have had the restoration event occur.

Let’s look at one of many similar style miracle reports from Craig Keener’s two volume set titled Miracles.  Keener's limb restoration report is actually a citation from a Pat Roberson book titled Miracles Can Be Yours Today.  Pat Robertson’s report (p. 176) is actually a story he said was told by the late evangelist T.L. Osborne.  Osborne was said to report “...a man leaning on crutches who's leg was severed below the knee.” was at a crusade in Ghana, West Africa which had 200,000 people in attendance. However, details such as the date or the man's name are never given. Nor has anyone for the alleged 200,000 in attendance or any local news reported the event. But Osborne is said to have reported that “A creative miracle had occurred for this man missing a leg and foot. It all grew back as good as new.”

Sound familiar? If so, it is because that is the type of second and third degree hearsay you find in the bible.

And if you are wondering, yes, this is 700 Club televangelist Pat Robertson who has an endless list of false prophecies and the one who in 1985, miraculously rescued Virginia Beach from Hurricane Gloria by rebuking the storm so that it shifted course and hit Long Island instead. And yes, this is radio Pentecostal evangelist and third world country missionary T.L. Osborne, who had in his own words a “mass-miracle ministry.”

Curiously, spontaneous regeneration of an amputated limb via prayer or otherwise has never been documented by any hospital, medical professional or journal and continues to be conspicuous by its absence.

As Dr. David P. Barash puts it, “There have been, and I very much hope will continue to be remarkable recoveries of brain function even after the most serious wounds (e.g., Gabrielle Giffords, so far as we can tell), but I guarantee not a single case in which a wounded veteran or member of Congress has sprouted a new head. Now that really would be a miracle!”