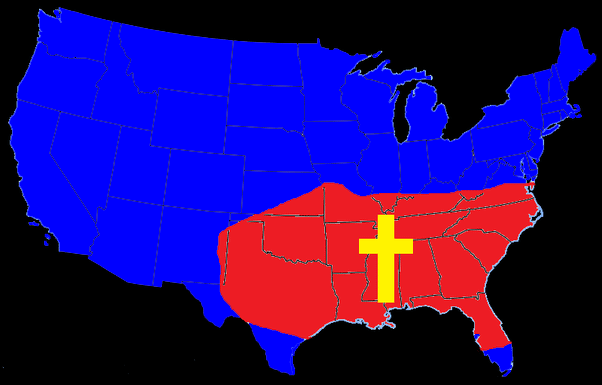 As counterintuitive as this may initially seem, it is completely rooted in fact. The United States’ “Bible Belt” which is characterized by the highest levels of biblical literalism, is especially plagued by this meme’s indicators of detriment. On nearly every measure of well-being, the most christian states with the highest rates of church attendance fare the worst. The Bible Belt is uniquely plagued by the highest rates of divorce, teen pregnancy, obesity, homicide, poverty, tobacco use, chronic disease, infant mortality and low life expectancy.

This also scales near perfectly on a global level. Norway, Iceland, Australia, Canada, Sweden, Switzerland, Belgium, Japan, the Netherlands and Denmark are among the most secular societies on planet Earth. Per the yearly United Nations’ Human Development Report they are also consistently ranked at the top for the healthiest countries year after year, as indicated by life expectancy, homicide rate, adult literacy, per capita income, educational attainment, gender equality, and infant mortality. 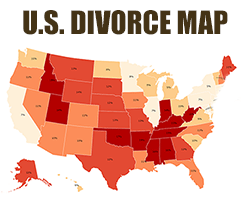 “One of the strongest factors predicting divorce rates is the concentration of conservative or evangelical Protestants in that county.” – American Journal of Sociology

Abstinence-only education, restrictions on the availability of birth control and abortion, support for marriage as the resolution of unexpected pregnancies, and distrust of secular education (especially higher education) among the populace in religiously conservative counties work to create an environment where young people tend not to pursue higher education or job training, and instead to engage in early marriage and childbearing.

Statistics show that the higher the educational level, higher the occupational level, higher the income, the less likely a couple are to divorce. For instance, Massachusetts has the highest rate of high school and college completion and one of the lowest divorce rates in the U.S. People who don’t complete high school and get married at a young age suffer from the strains of not being emotionally mature and not having the income to help weather the difficulties of marriage. 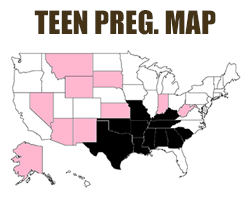 In the abstinence-based sex education of the Bible Belt where contraceptive demonstrations are largely forbidden, teen birth rates lead the nation at: Greater than 25 per every 1000 girls. In stark contrast, Vermont and New Jersey for instance, which have some of the lowest teen pregnancy rates, require sex education including instruction in different methods of contraception. A 2015 Center for Disease Control study of ninth and twelfth graders found that in Bible Belt states, the percentage of students using birth control ranged from 22.9 to 14.9 percent which is a national low.

Even with U.S. teen births are at their lowest level in more than 60 years (ten percent lower than 2009, fourtythree percent below their peak in 1970), teen birth rates remain highest in America’s most religious, politically conservative and blue-collar states. 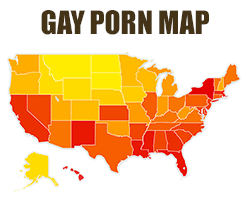 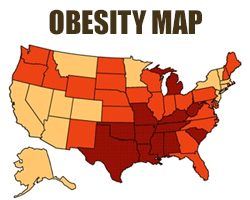 According to research from Northwestern University, youths of a healthy weight who frequently participated in religious activities were twice as likely to become obese by middle age than their less-religious peers. Even when controlling for race, sex, education and income. Several studies have found an association between high religious involvement and obesity.

Religion encourages a focus on the afterlife which distracts a from focusing on health goals in this life, as well as a fatalistic attitude toward health, “It’s in God's hands, so I will just let come what may.” are potential reasons stated by Dr. David Katz, director of Yale University's Prevention Research Center. Believing that God is control of one's life may reduce the likelihood that those of faith take matters into their own hands and make changes.

Obesity is a serious issue associated with a number of health problems such as high blood pressure, cancers and diabetes – problems that drain away quality life and cost the nation $150 billion each year. One in four young adults who try to join the military are ineligible due to fitness and weight concerns. 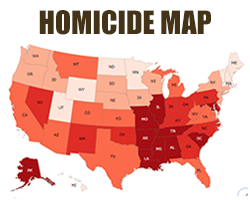 With the bible emphasizing punishment as the primary response to sin, it should not be surprising that the South continues to have more than its share of violent crimes over the years, even as the rest of the country gets safer. Consider child-abuse fatality rates: Highly religious Mississippi's is twice that of highly secular New Hampshire's, and highly religious Kentucky's is four times higher than highly secular Oregon. The former slaveholding states of the old Confederacy all rank in the top 20 states for murder.

According to the United Nations' 2011 Global Study on Homicide, of the 10 nations with the highest homicide rates, all are very religious, and many — such as Colombia, Mexico, El Salvador and Brazil — are among the most theistic nations in the world. Of the nations with the lowest homicide rates, nearly all are very secular, with seven ranking among the least theistic nations, such as Sweden, Japan, Norway and the Netherlands. 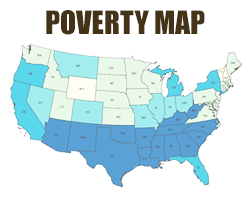 Poverty areas are places where more than 20 percent of the people live below the federal poverty line, which varies by family size. For a family of four, the poverty line in most states is an annual income of $23,850. Today, 25.7 percent of all Americans live in such areas, up from 18.1 percent in 2000, according to the 2014 US Census Bureau report.

Having a quarter of the nation living this way is a problem: Poverty areas are typically marked by “higher crime rates, poor housing conditions, and fewer job opportunities,” the report points out. Southern states consistently lag the rest of the country in good things like wages, economic mobility and access to health care, while leading it in bad things like poverty, obesity and general unhappiness. 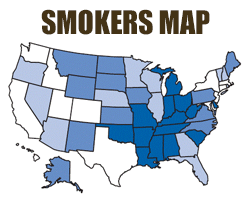 Tobacco use is the leading cause of preventable disease and death in the United States, resulting in approximately 480,000 premature deaths and more than $300 billion in direct health care expenditures and productivity losses each year. West Virginia, Kentucky, Arkansas, Tennessee, Louisiana, and Mississippi continually lead the "pack."  As a remedy, the U.S. Centers for Disease Control advises "increasing the access to evidence-based behavioral counseling and FDA-approved medication can also help reduce tobacco use..."

However, despite the facts as well as the alleged faith of Bible-Belters, biblical verses like 1 Corinthians 6:19-20 haven't stopped tobacco farmers in the south from rationalizing. To date, they continue to churn out millions of pounds of tobacco for sale. Secondhand smoke is also extremely detrimental, which is why it’s important to know the health climate of the state you live in since it creates your breathing environment.

Where a baby is born in the U.S. can help predict how likely they are to live to see their first birthday. In 2016, the infant mortality rate in Alabama was nearly triple that of Vermont. If Alabama were a country, its rate of infant deaths per 1,000 would place it slightly behind Lebanon in the world rankings. Mississippi would be somewhere between Botswana and Bahrain.

Dr. Paul Jarris, chief medical officer for the March of Dimes, says "We know there are differences in rates of premature birth and maternal mortality and infant mortality based upon social factors, such as educational level, income level, housing safety, safeness of a neighborhood, employment."   67 percent of deaths are in the postneonatal period, from 1 month to 1 year of life, when infants are out of the hospital system. 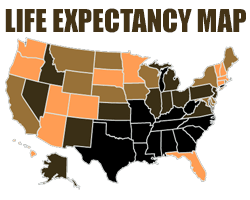 If a bible belter does survive the crib, the struggle is far from over. Bible belt states have the worst life expectancies in the United States. This issue involves a mixture of culture and bad policy. The south is home to extreme poverty, a lack of accessible health care (ex. Texas leads the nation with 25% uninsured), lax worker/environmental protections, and a culture that consumes massive amounts of fatty fried foods. These factors create a perfect storm of bad health that severely erodes the life expectancy of huge portions of the southern population.

Overall, premature death occurs almost twice as often in many of the southern states compared to Minnesota and California. In addition, lack of smoking bans and lack of walkability only add to the problem.

Compound the above factors with a large focus on the afterlife that can eclipse the focus and need for health in this life. Fundamental Christianity often has a skepticism toward science in general. Such a mindset too often translates into a mistrust in doctors and medicine which only make matters worse.

So the next time you get a knock on your door from people wanting to share the “good news”, ask them why anyone in their right mind would want to voluntarily invite dysfunction into their life.